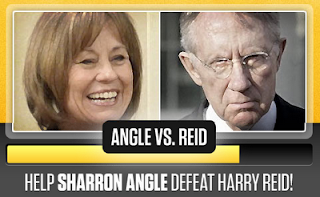 Right Klik Blog has a great idea.  It's called "Ten Buck Fridays".  It gives the readers a chance to vote in a weekly poll to choose a candidate who is worthy of a $10 donation in support of their November 2010 election campaign.

This week's winner is Sharron Angle who is running for U.S. Senate in Nevada against Democrat Senate Majority Leader Harry Reid.  Horrible Harry Reid has plenty of money and is using it to bad mouth Ms. Angle every chance he gets.  Sharron is the underdog and in need of funds to combat the assault.

You can read Sharron Angle's stance on the issues at this site.

If you think Sharron Angle is a worthy candidate, you can send your $10 (or more) donation to Sharron Angle by clicking on her Donation Page.

I made my donation and am looking forward to RightKlik's next poll which will be out on Sunday.

Remember to check it out every week and then vote in the poll. It's up to us to help support good, conservative candidates who will fight against the Obamanation agenda being shoved down our throats every day.  And remember, if you vote for a candidate in the poll, make sure you have checked them out completely and really believe they are the best choice.

Check back every Friday to see who the won the poll.

UPDATE 6/19:
Everyone who participates in this should put "Ten Buck Fridays" somewhere in the online donation form so that recipients know what's happening!

Posted by The Conservative Lady at 4:44 PM