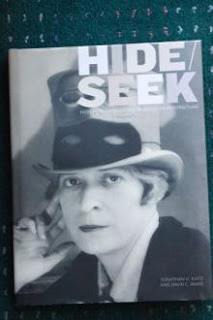 The Smithsonian Institute is paid for by our tax dollars:

This year, the National Portrait Gallery (a Smithsonian museum) is celebrating the Christmas season with an exhibition called, "Hide/Seek:  Difference and Desire in American Portraiture".  No, it's not about that kid's game where you hide and someone comes looking for you.  Although, you may want to hide your eyes after seeing some of this "artwork".

(CNSNews.com) -- The federally funded National Portrait Gallery, one of the museums of the Smithsonian Institution, is currently showing an exhibition that features images of an ant-covered Jesus, male genitals, naked brothers kissing, men in chains, Ellen DeGeneres grabbing her breasts, and a painting the Smithsonian itself describes in the show's catalog as "homoerotic."

But do not fret.  According to Ms. St. Thomas, your tax dollars don't pay for the exhibits:

Doesn't that make you feel better?

There's free speech in America.  These so-called "artists" have free speech.  But I agree with Gary Scott, an economist who is a senior research fellow at the Intercollegiate Studies Institute:


“Leaving aside the merit or lack of it in the exhibit itself, the notion that taxpayers don’t fund it is unpersuasive,” said Scott. “First, most of the overall budget derives from tax monies for the facility, and maintenance and staff.  Second, the exhibit appears inside and is monitored by staff. Finally, if it was funded only by outside funding the exhibit would be outside in a snowdrift.”

Not only that, this exhibit is the most expensive they've ever had:


A spokesperson for the gallery’s external affairs office said the cost to mount the “Hide/Seek” exhibit is $750,000, the most expensive exhibition to date at the National Portrait Gallery.

And if you take the time to look at the article, you'll see it's worth every penny...NOT.

From the photos included in the article, I think this exhibit is nothing by pornography.  They have all kinds of "intellectual" explanations for the "meanings" behind the "art", but I think it's just an excuse to be outrageous.  And please don't think I am a homophobe and dislike this exhibit because it is considered "gay art".  This is not "art"...this is trash.

And, of course, there's the obligatory piece of garbage depicting Jesus Christ in a debasing manner to add to the others we've seen over the years.  This is the saddest thing of all.  I'm not even going to ask the question about why is it OK to treat Christianity this way, but not...well you know the rest.

Because the "artwork" is so graphic, the writer of the article had to put up a "warning" to the readers about the exhibit photos published with her piece.  So I'll post the warning and a link to the article about the disgusting trash our Smithsonian museum is exhibiting and you can decide whether or not you want to see this crap for yourself.

WARNING: This story contains graphic photographs of items on display in an exhibit at the Smithsonian Institution’s National Portrait Gallery.  Article at CNS News.

On Tuesday, the Speaker-to-be warned the Smithsonian Institution that if it did not pull its controversial exhibit — “Hide/Seek: Difference and Desire in American Portraiture” — which featured images of an ant-covered crucifix and “homoerotic” art, its federal funding will come under serious scrutiny when Congress considers the next budget.

In a follow-up to yesterday’s story on the Christmastime exhibit, CNSNews.com asked a number of congressional leaders from both sides of the aisle whether the exhibit should continue or be canceled.  Both Minority Leader Boehner and Minority Whip Eric Cantor indicated it should be canceled.


“American families have a right to expect better from recipients of taxpayer funds in a tough economy,” Boehner’s Spokesman Kevin Smith told CNSNews.com. “While the amount of money involved may be small, it’s symbolic of the arrogance Washington routinely applies to thousands of spending decisions involving Americans’ hard-earned money at a time when one in every 10 Americans is out of work and our children’s future is being threatened by debt.

“Smithsonian officials should either acknowledge the mistake and correct it, or be prepared to face tough scrutiny beginning in January when the new majority in the House moves to end the job-killing spending spree in Washington,” Smith said.
When asked to clarify what exactly Boehner meant by calling on the Smithsonian to “correct” their mistake with the exhibit, Smith responded in an email that Boehner wanted the exhibit “cancelled.”


“I regret that some reports about the exhibit have created an impression that the video is intentionally sacrilegious,” the statement read. “In fact, the artists’s intention was to depict the suffering of an AIDS victim. It was not the museum’s intention to offend. We are removing the video today. The museum‘s statement at the exhibition’s entrance, ‘This exhibition contains mature themes,’ will remain in place.”

Posted by The Conservative Lady at 2:31 AM