My Day At The 8.28 Restoring Honor Rally 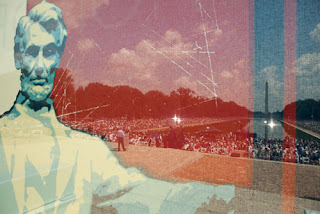 By now you've heard all of the information about what was said and who was there at the Restoring Honor Rally last Saturday.  My post is about our group's day at the event.
Eight of us headed to DC on Friday to attend Glenn Beck's Restoring Honor Rally which was taking place on Saturday, 8/28.  We decided to stay in Alexandria at the same hotel we did for the 9.12 March on DC because the logistics worked out so well for us that day.   Our evening started off with happy hour in our room and a delicious dinner at the Chart House.

On our return to the hotel after dinner, a woman from Georgia told us that the Van Dorn Metro Station (the one closest to us) was not going to be running trains in the morning.  The hotel staff verified this information.   We would have to take a shuttle bus to another station or find a station where we could park our cars to take the Metro for our trip into DC for the Rally.  They were doing "maintenance" and "cleaning weeds" from the tracks or some such thing.  Not good news.  A shuttle bus transporting hundreds of people between stations in the morning would guarantee getting to the Rally late.  So hubby and two of the other guys took off at midnight to scope out the parking situation at alternate stations.  No real luck with that...not much parking at the next closest station and they couldn't find the other station they were looking for.  So, we were going to have to play it by ear in the morning.  I maybe got one hour of sleep that night worrying about getting to the rally on time.

On Saturday morning, the hotel clerk told us that the Metro was running at Van Dorn afterall, so that was good news.  The bad news was that the train at Van Dorn was a shuttle train to the next station where we were to transfer to the Blue Line into DC.  After about a half an hour, another train shows up...but it wasn't the Blue Line.  It was a shuttle train filled with more people who had to wait for the Blue Line.  The crowds were growing, with no where to go.  The people were patient, friendly and excited about the Rally, so although it was unfortunate that we had a delay in our travel, it was not an unpleasant wait. 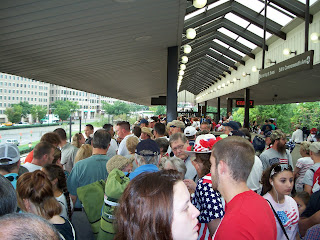 Waiting on the Platform for the Blue Line.

It took a pretty long time, but the Blue Line finally showed up, and luckily we were able to get on it and head off to the Rally.  There were plenty of people left waiting on the platform for the next train.  I hope another shuttle train didn't show up in between. 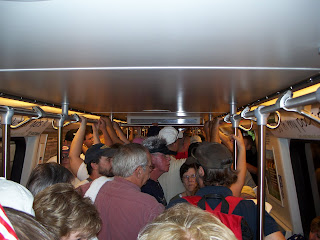 Standing room only on the train. 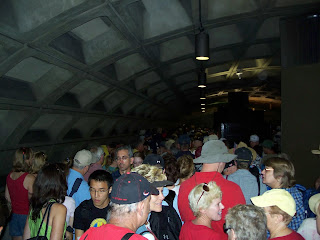 Inside the Foggy Bottom Metro Station trying to make our way out.

I'm sure you've heard a lot of negative reports by the state-controlled media liars.  It's so disappointing to think that we can not trust anything they say.  To make up lies and distortions about what actually happened at the Rally is so sad and goes to show you how much they hate (and fear) Glenn Beck and those who attended.  In reality, it was just as Glenn said it would be...non-political, a tribute to/fund raiser for the Special Operations Warrior Foundation and a message about getting our lives in order and turning to God.  Glenn asks us all to take the 40 Days & 40 Nights Pledge.
At the end of the event, Glenn announced the re-institution of the Black Robe Regiment / Black Robe Brigade (it's been called both).  Glenn had rented out The Kennedy Center on Friday night and hosted about 1,500 clerics of various faiths who have joined him in the movement.  This video will give you some information on the history of the Black Robe Regiment and their involvement in the Revolutionary War.

The people were fantastic, the crowds were enormous, the event was inspirational and the day was hot.  Boy, was it hot.  We were sitting in the side field with an angled view of a jumbo-tron.  We had an OK view, not the best, but we could see and hear what was happening on stage.  Thousands of people, including children, were all around us, but when the event began, silence took over and we could hear everything that was going on.  The only time we couldn't hear, was when an annoying helicopter kept circling overhead. 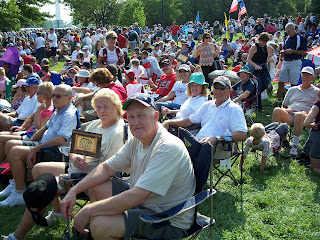 Our group with a few thousand friends around us.

Did you hear about the "geese flyover"?  Our son sent me a text message on Sunday that said..."they couldn't have a military flyover, so God sent a flock of geese".  As a matter of fact, we saw the geese fly over.  Glenn could not get a Color Guard or a military flyover approved for the event.  By some "coincidence", just before the event was to begin...well check this out. 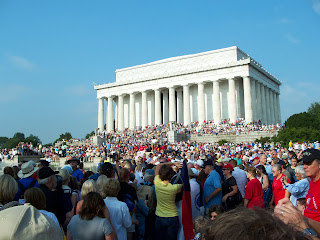 This is probably the best shot I took of the crowd around the Lincoln Memorial.
I've seen some of the videos posted of interviews with people in attendance.  I'm always skeptical of someone with a microphone asking questions.  One gal in our group was asked to give an interview by a guy claiming to be making YouTube videos for an outfit called "Spotlight Sound Bites".  He seemed OK and, after being egged on by my friends, I even made a short comment, answered a question or two while keeping it simple and non-controversial.  I tried looking his site up yesterday, but I couldn't find it. UPDATE:  Soloman found the YouTube Channel.  So far I haven't made the cut.  Here's the link:  Spotlight Sound Bites
A lady with a tape recorder stopped by and asked one of our group a question.  She proceeded to tell us that she was a Democrat who now wants Obama impeached.  Here's her websites:
Patriot's Heart Network
Someone Died For Me Today
After the rally, people didn't leave quickly like they did after the 9.12 March on DC last September.  They hung around visiting the memorials along the mall.  We did a little sightseeing, too, before we left. 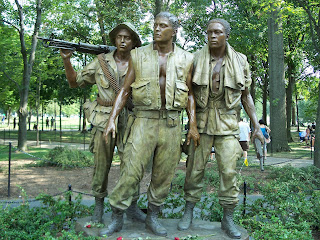 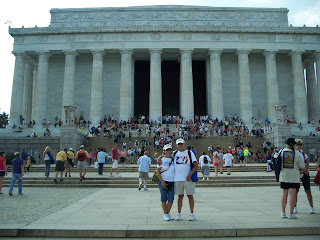 TCL & TCGuy at The Lincoln Memorial 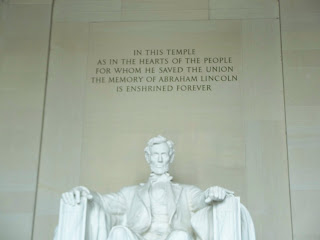 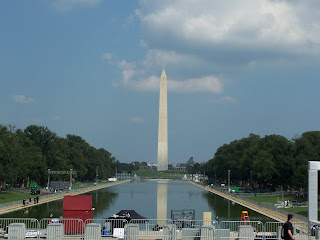 Washington Monument
But like the 9.12 March on DC...the crowds left the area clean as a whistle. 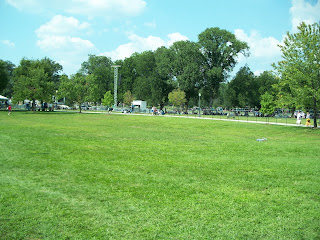 No trash left on the lawns.
Go to Hack Wilson to see the difference in the aftermath of 8.28 vs Obama's Inauguration.  Unbelievable!
And here we are, back at the Metro.  Our trip back is another story about full trains, waiting for over an hour to find one we could actually squeeze ourselves into for the ride back to Van Dorn and our group splitting up between trains.  While sitting in the Metro Station at Foggy Bottom waiting for the train, a worker sweeping up the floor commented to us about how friendly everyone there waiting for the train was to him.  Not like the Washingtonians who he said "won't even speak to him".  At least there's one guy in DC who doesn't think we're all racists.

What a crowd and what a great photo!  I was so blessed to have had the opportunity to attend.  I think Glenn Beck has got it right.  The Restoring Honor Rally will begin the real change our country so desperately needs.  It's the change in us as individuals that will result in a better future for America. 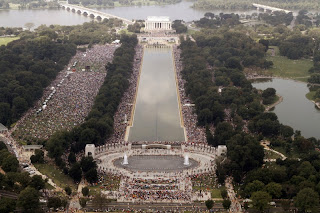 Glenn estimates there were 300,000 to 600,000 people in attendance.
There are lots of wonderful photographs of the Rally at Glenn Beck's  website.

The Special Operations Warrior Foundation was honored at the event.  If you would like to donate to this wonderful cause, it's not too late.  Here is their website:  SOWF Website
After threatening to protest the Restoring Honor Rally, the Black Panthers had a change of heart.  Good move by the Panthers, I just hope their threats didn't cause anyone to change their mind about attending.  It would be sad if threats caused a family to miss out on this historic day.
I kept waiting for Al Sharpton to show up at the Lincoln Memorial, but somehow I missed him.  Eyeblast TV had some photos from Rev. Sharpton's rally.  An estimated 30,000 people attended. 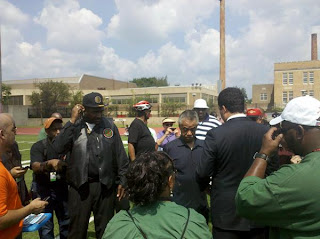 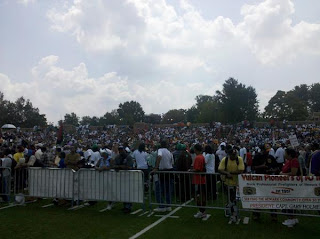 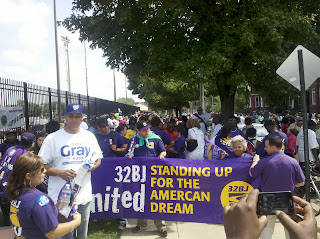 Posted by The Conservative Lady at 8:48 PM